“An imaginative and stunning production… An ancient Greek drama for our time.”

A gorgeous, elegant, and substantial work of interdisciplinary performance, this version of The Eumenides was performed amidst extraordinary artifacts in The University of Pennsylvania’s Museum of Archaeology and Anthropology. The Eumenides is the third story in Aeschylus’ classic Oresteia trilogy. It is a story about mother-murder, the foundations of our juried-justice system, and shifts in world order. The Eumenides was born out of a collaboration between White Box Theatre and theater director Marcia Ferguson of the University of Pennsylvania Theatre Arts Program and her students.  The show was performed to sold-out audiences in Spring 2016, and again when it was remounted in September 2016 as part of the Philadelphia Fringe Festival. 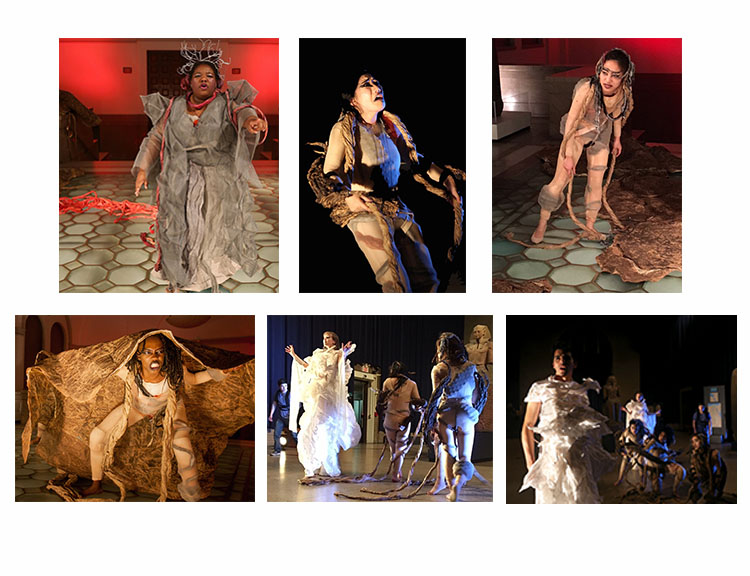 THE EUMENIDES Trailer from Sebastienne Mundheim on Vimeo.

THE EUMENIDES Studio Process from Sebastienne Mundheim on Vimeo.

This performance was created as a site-specific work for three galleries at the University of Pennsylvania Museum: Pepper Hall, The Rotunda, and Lower Egypt. The performance could be adapted for the stage or another grand space. Obviously it would work well among Greek sculpture. We were particularly interested in the distinct acoustical spaces of the museum. Currently all lighting design is from the floor. 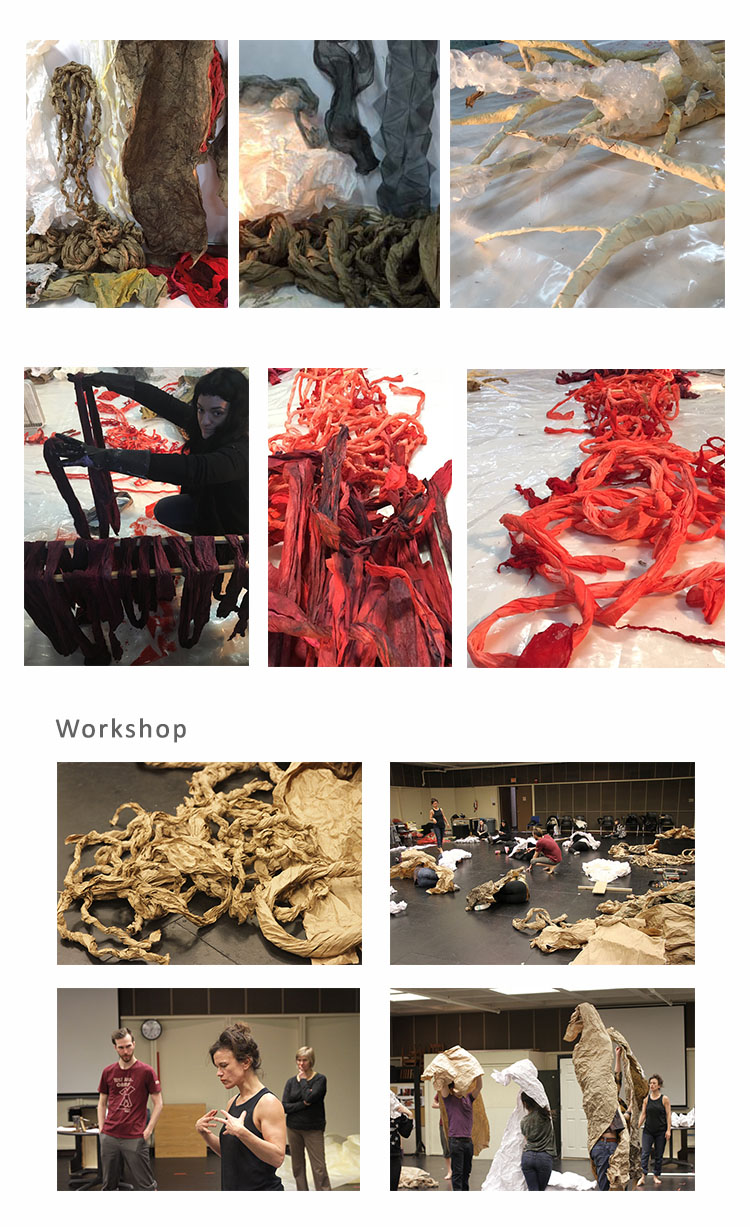 These were notes written at the beginning of the process. They reflect thematic/metaphor development in costume, material and character.

I am thinking about this work  very much in terms of pageantry, spectacle, opera. I feel risk in trying to make work that is beautiful instead of ironic or intellectual. Beauty is risky.

In the space of the museum, these artists come to mind as inspiration:

Some underlying thoughts about development/observation. I have been working with paper for a long time. I have been obsessed with the dying, crumpling, twisting of paper for the past year. I am loving saturated color. This is purely aesthetic. I love the way light works on crumpled white paper. It is soothing to me. I find a room full of red twists as exciting as a dahlia or a tulip – simple beauty. I also love the life that moving paper has.

Conceptually, I have been thinking about several things for a number of years that seem to be manifesting here now. One I think about how we as humans crop out of the earth. How the environment shapes us. There is some writing by Nikos Kazantsakis in the Fratracides where he describes the skin and expression on the faces of the Cypriatic people that connects to red earth and craggy hardness around them – and I have never gotten that image out of my head.

The other thing, related to cropping out of the earth, is rethinking about our giant “organism- ness” and how blood runs under the earth like a secret waterway. How we reconvene in electric clouds – how we are like rhizomes, mycelium, other organisms with hidden connectivity. None of my ideas are earth shatteringly new, but they do live in my constant consciousness when I look at the world and live in it.

So – these themes, these materials, this response to space and need for pageantry/spectacle all collide and cohere as I approach Eumenides.

Some thoughts in watching the cast – they are so young – so beautiful in their personal characters – there is a kind of innocence and authenticity in each of them. And its hard initially to image any of them except Orestes as anything like the characters they are portraying – at least at first – but it is interesting to look at their secret powers – the truth of their bodies – their spirits – the manner and thinking about those things in connection to the power of gods, stately women, priestesses. I want to keep recognizing those qualities of individual, and challenge my own ideas of what is needed to be a god, stately woman, priestess. I have wondered whether there should be some element of this youth in their costuming to contrast these very stylized, designy “serious” sculptural elements I have been attracted to making.

Another challenge – we have not yet addressed the museum as context – we have so little time – we are barely addressing the architectural space — what element of the Chinese, the Egyptian, the University are we incorporating into the work?

External, paper based costumes, internal monochromatic across the cast – maybe all black but different shapes – could be simple – lycra based – could be 1960s fitted, airline, leisure suit look (not all black but with in the palette of the papers). Rebecca has talked about linen. I think what ever it is it has to be very easy to move in, and it has to be fitted to contrast the paper …
Overall question – should a Chinese sensibility be incorporated? An Egyptian?

Furies – Out of the earth – the brown paper – horizontal movement – extending whipping tentacles, breathing reddish “wounds”, blood sucking components, sexual, scary, beautiful, the earth raises and shows lava, blood, under-world life – there are these pustules of bio- luminiscence – they are the brutality of life, the need to cut down to make new – the acceptance of natural order – there is something too that re-interprets the role of the womb/mother house of the seed. I don’t want them to be ugly underneath – they should be beautiful – I wonder – given Marcia’s desire for the deep sea and illuminated jellyfish – if the elongation of arms, fingers, ribs, could almost be like sea urchin spines that would straighten when they would become like prickly pods – let’s think about their role as a fertility source in individual homes – subjugated somewhat by male order – present in other ways – defanged? Declawed? Refanged? Reclawed? I like the illuminated bubble wrap maybe embedded revealed in their necks, armpits, unfolding flaps, to be revealed as they descend into the next world – internal, self-lighting, light … seeds, egg sacs.

In talking to Melissa, I like the idea of bungee cording arms to a boustier to restrict movement .. maybe too complicated this time around …

Hair – a wet look – headdresses could be dog-like – could be made of sticks look – thin band.

Clytemnestra – A long trail of red – impossibly long, that is left behind her – she should only walk in straight lines. Initially it is hidden under a lump of earth, like the furies. Maybe some pieces of the earth remain at the base of her costume. A throat piece that hints at the cut – a sleeve, just one with some red coming off of it. The right hand. Her “cape” or over-garment should be constructivist –screen, geometrical, organized, masculine … I like the treatment of the back – referencing what is behind, referencing Aggememnon – just visually correct. She is always unnaturally elevated. She has boxes on which she stands. She is the anchoring reason for every act. She is always present. Can she hide behind the statue – can she get there in between Rotunda and Final?

Priestess – Gray – maybe jutte trail behind her … Maybe White … athletic – she is between worlds – she should use the barnacle breather as a divining piece – it should be central, lying on the constructed rock that Orestes Hides behind.

Orestes – He is our conduit – our Harry Potter – our guide – he should be in blue jeans and blue sweat shirt, sneakers – maybe a green canvas knapsack. He fell into this story. 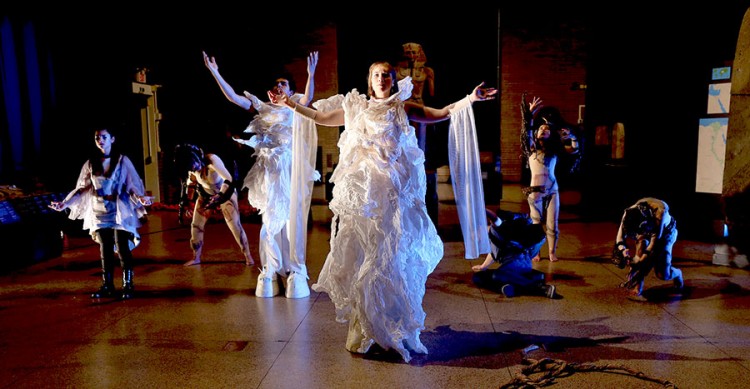