Currently Franklin: The Story of a Paper Boy

“Full of charm…information and ideas. Suitable for children, as well as everybody else … it is a pleasure to see so much imagination …”

When Benjamin Franklin was a young boy, he loved the sea and longed to be a sailor, but his father didn’t want Benjamin to drown at sea, so Benjamin Franklin had to find the curiosity and adventure of the sea someplace else …  Sebastienne Mundheim’s lyrical story of America’s most well-known founding father follows Franklin from his early childhood through many of his accomplishments as printer, inventor, and diplomat. A set made entirely of paper, dancing printing presses, giant buckle shoes, ethereal movers, comic actors, light and shadow play, and an eclectic soundscape use this American icon to explore the aesthetics of storytelling and ask questions about American identity.

“ ...unquestionably one of the most creative and engaging pieces of theatre I have ever seen.... while the individual elements of Mundheim’s shows are familiar---puppetry, simple lighting and sound, dance and movement, handcrafted props, voice, masks, poetry and narrative---it is their seamless and unexpected combination, as well as her wholly original aesthetic sensibility, that create a sense of surprise and revelation. These visual and material effects are anchored in a subtle and intelligent script that is both accessible and challenging to children and adults ... I highly recommend it.” 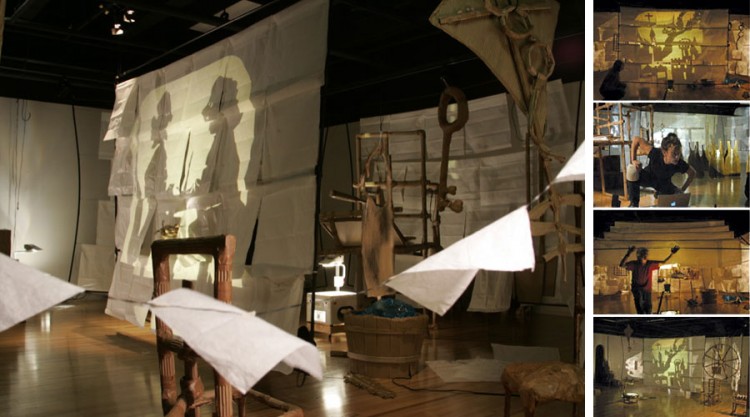 “...As the President of the Friends of Franklin, an international organization that promotes and explores Franklin’s legacy, I highly recommend “Currently Franklin” to people of any age, and for that matter even if they do not understand English, visually it’s a gem.” 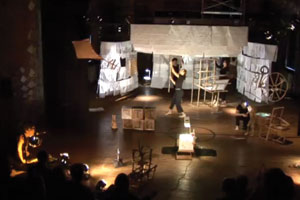 “Currently Franklin: The Story of a Paper Boy,” has many outreach possibilities. Content connections can be drawn to history, social studies, visual and performing arts, as well as education. Workshops are always designed in conjunction with the presenting organizations, and are taught by Sebastienne Mundheim or cast members. Workshops can range from one-hour sessions, to semester-long programs.

Funding and Presenting Support include: The Writers’ House of Franklin and Marshall College, The Philips Museum of Lancaster, PA, The Fulton Family Ensemble of the Fulton Theatre, The Community Partnerships Program of the University of Pennsylvania, The Rotunda of the University of Pennsylvania, The Stonington Opera House, Philadelphia Live Arts Festival,  Lights of Liberty, Sigi Berwind, Ted and Stevie Wolf,  and Gerry Lenfest.