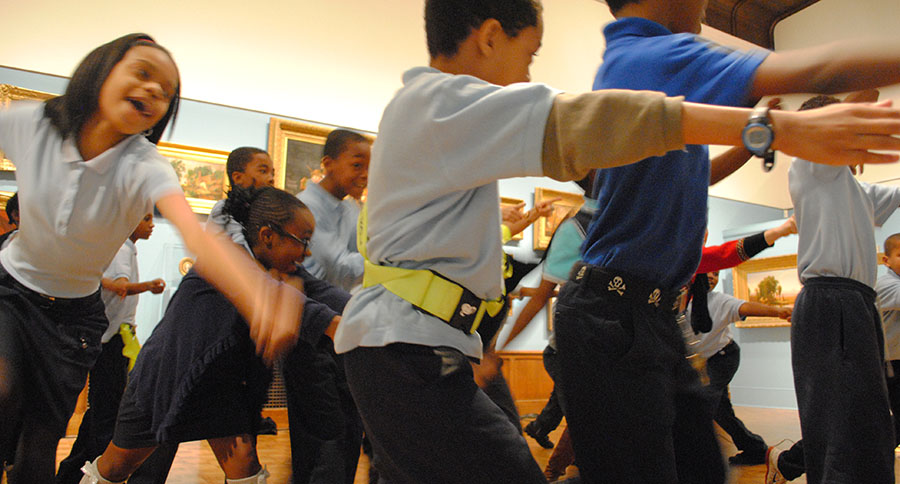 In 1994, the Gallery Director at the Arthur Ross Gallery asked Mundheim to create an interactive education program for the gallery in conjunction with its exhibition of Saul Steinberg. Mundheim remembered her own resistance to docent-led museum experiences as a child and tried to think about a more palatable approach to discovery and engagement. She created programming that began with research and distillation for her, and resulted in a program with  flexible, open-ended questions, close looking, interdisciplinary storytelling, and hands-on activities. Over the course of 21 years, Mundheim refined her approach for each of these elements.

A typical program begins outside of the gallery space. Students are asked what kind of preparation they have had for the visit and what assumptions they have. Next they are given an overview of what to expect within the two-hour experience, finally they introduced to basic rules of the gallery. Students are then invited into the gallery and given an opportunity to engage independently with the work in the room. They might be asked to think about something that is true about all the objects in the room. They might be asked to notice similarities in several works. They might be asked to think of one question related to a specific work of art. They are given 1-2 prompts to focus their looking at the exhibition in its entirety. The questions tend to be very open-ended so that we can notice what attracts the students, and we can give real space for their discovery. 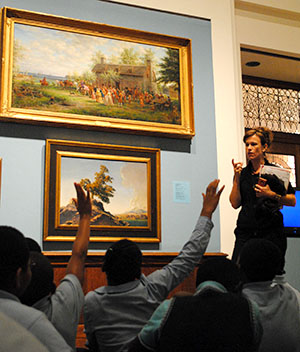 Next students circle-up and discuss observations. Sebastienne and her teaching assistant have to be very knowledgeable about content in order to engage with the breadth of questions. The discussion begins with student observations and then moves into the thematics and history that comes together in  a short presentation/performance using a lyrical script, props, and movement.

Presentations/performance might include: biographical portraiture of the artist or collector, elements of technique, specific vocabulary used in repetition to highlight themes and concepts.  The presentation models imaginative interpretation to an arts experience and expands the context of the exhibition.

With new content, the students are asked to work in pairs or trios on a visual scavenger hunt. Some questions are very specific, many are complex or open-ended. Ambiguity and open-ended questions encourage students to talk to each other, interpret visual experiences, and come to conclusions after close-looking and conversations.

After the scavenger hunt, Mundheim and students gather to discuss student discoveries and questions. After a short discussion,  5-7 of the scavenger hunt discoveries are used to review the work again in a more focused way.  Student observations and questions help shape the works  choosen to look at again. Again, breadth of knowledge and reflection on the work are necessary for this in order to both make space for students’ thoughts and impulses, and also to weave in the themes in the presentation.

There is always at least one physical activity– a way in which to take a core concept and language from the exhibition and embody the concept and text. Focused physicalization is important for a focused mind and group organization. It also begins to introduce arts-based responses to exhibition and invites students to respond to work in another way. 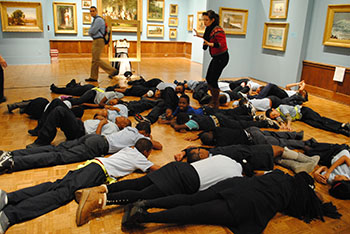 Sometimes Mundheim has students lie on the floor, close their eyes and remember details of a work of art in their mind’s eye.  This is also an important part of reflective practice – checking to see what is remembered, taking the time to reconstitute an experience in stillness.

Finally, there is always a hands-on project —   often drawing from looking, another form of observing, reflecting, and embodying the work. Sometimes, if there is  longer time in the gallery, another more technique specific project might happen –  for example, collaging in the spirit of quilting, or stitching in the spirit of other textile work.

Finally, teachers are given a follow-up packet that includes history and description of the show, lesson plans to expand on the in-gallery experience, and discussion/essay questions for students to use back in the classroom.

Sebastienne Mundheim/White Box Theatre created programming for at least one exhibition a year for 21 years.  Exhibitions from 2009-2015 focused primarily on collections of American Art.  From 1995-2008 the exhibitions were wide-ranging.

William H. Johnson: An American Modern, an exhibition from the Smithsonian Institution Traveling Exhibition Service (SITES) featured rare paintings by William H. Johnson, from the collection of the James E. Lewis Museum at Morgan State University. An essential figure in modern American art, William H. Johnson (1901-1970) was a virtuoso skilled in various media and techniques, and produced thousands of works over a career that spanned decades, continents and genres.

Creating: Quilts of the Lakota presented over twenty 20th and 21st century quilts from the Pine Ridge Heritage Center and Indian Reservation in South Dakota. Mary Bordeaux, a member of the Lakota tribe, curated this exhibition with the Arthur Ross Gallery. “Making items for family and the community is a large part of the Lakota’s way of life,” notes Bordeaux. In addition, 19th-century Lakota artifacts, such as moccasins, a cradleboard, and parfleche boxes, were lent by the Penn Museum to provide a context for Native sewing traditions prior to the introduction of quilting at Pine Ridge.

California Impressionism: Masters of Light presented thirty paintings that reveal the California coastline and reflect a time when railroad expansion and the gold rush changed the American landscape.

Dramatic Impressions: Japanese Theatre Prints from the Gilbert Luber Collection  explored the dynamic relationship of the Japanese woodblock print to traditional kabuki theater during the 19th and 20th centuries. By focusing on representations of theater and actors early modern printmakers developed many visual forms re-creating the effects of staging, pose, makeup and costume in a print medium.  The prints illustrate images of actors performing as men and women, villains and heroes, losers and lovers.

Two Venetian Masters: Canaletto and Domenico Tiepolo Etchings from the Arthur Ross Foundation presented etchings by Canaletto (Antonio Canal, 1697-1768) and Giovanni Domenico Tiepolo (1727-1804), two of the great Italian artists who made Venice an artistic capital during the eighteenth century. Canaletto was famous throughout Europe for his remarkable view paintings (known as vedute) that captured Venice’s most famous landmarks and the city’s unique atmosphere, created by the interplay of light and water. Domenico Tiepolo, son of the great history painter Giovanni Battista Tiepolo (1696-1770) was a renowned printmaker, painter, and draftsman who managed to work in support of his father’s work while forging his own artistic identity. This series, published in 1774, showcases Tiepolo’s attention to pose, costume and physiognomy as well as his wide-ranging use of etching techniques. The exhibition also features examples of Tiepolo’s etchings of religious subjects invented by himself and his father.

Sargent to Freud: Modern British Paintings and Drawings in the Beaverbrook Collection organized by Curator Ian Lumsden from the collection assembled by Canadian press magnate, the first Baron Beaverbrook, who was a long-time resident of England and patron of British art. The exhibit is an assemblage of modern British paintings and drawings acquired by Lord Beaverbrook toward the end of his life, for his last philanthropic endeavor, the building of The Beaverbrook Art Gallery.